The Noongar people of Western Australia are one of the nation’s largest and proudest Indigenous groups. Their country extends from semi-arid wheat belt land in the north, down to coastal Esperance. We are delighted have a number of Noongar Artist’s work on display and for sale at Bina Maya Gallery

Bradley Kickett is a local Noongar artist. He was born in Northam and grew up in Perth. He is descended from the Kickett clan in York, Western Australia. He began painting in 2007.

Bradley’s style of art is abstract with paintings depicted from an aerial view and illustrated in a fluid style that he has developed over the last three years. Bradley’s art pieces are influenced by experiencing Noongar country, from the oceans to the rivers and seeing the wildflowers and the land from the air and showing the flow and the shapes of the earth. These images are all interwoven with the history and the stories that are shared and passed down to him from his family and elders.

Bradley is currently studying in his second year at Curtin University, towards a Bachelor of Arts majoring in fine art.

Rohin Kickett is a Nyoongar artist from the Balardong region Western Australia. Rohin’s
artworks are inspired by his family stories, and exploring the Balardong region. His artworks
represent the Nyoongar region by aerial view landscapes in an abstract style, while also exploring alternative ways of mark making. 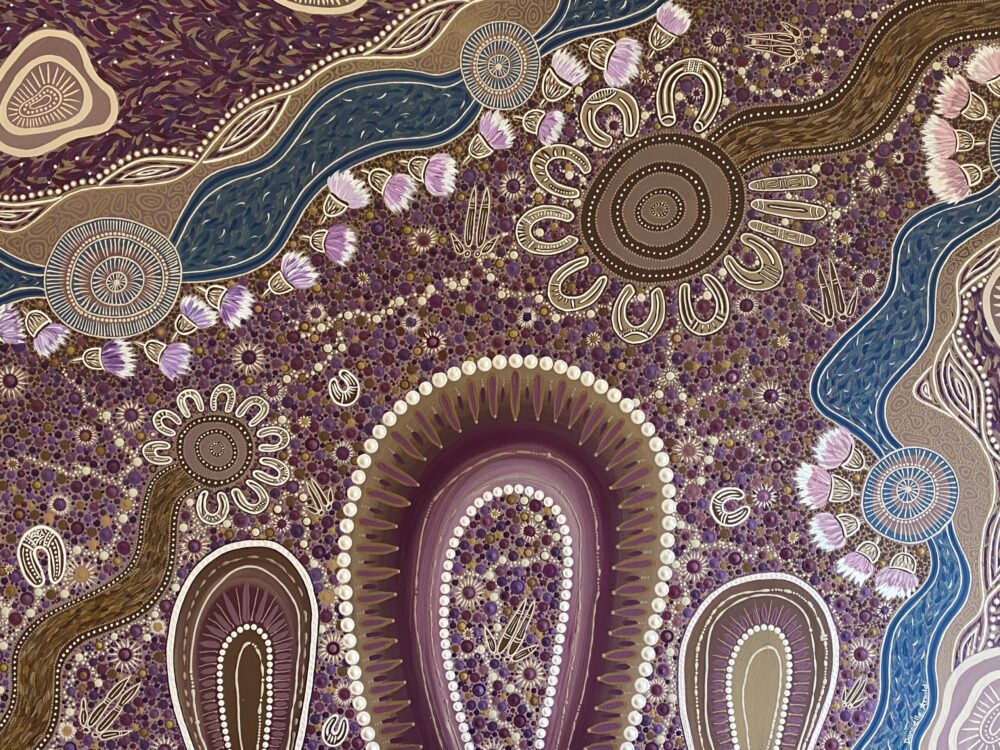 Born in Subiaco W.A, Dannielle belongs to two tribes, her Mother is Nyoongar from Ballardong region and her Father is Alawa from Arnhem Land, so her paintings often reflect either her Nyoongar Boodja ( Country ) or Arnhem Land country. She started to really take interest in Art and Culture when she was 8yrs old, her Grandfather would tell her stories and draw out the story in the dirt, showing her what symbols are used for and how to read them, she would then go and draw those stories on paper.

She started painting at around 10yrs old and has continued to this day to showcase some of these unique and stunning pieces. Art is life for Dannielle, it’s her medicine, heart, passion. She paints from the heart to bring joy to others. Her dream is to one day, run Art workshops for Aboriginal kid’s in care/ troubled kids, to hopefully bring some healing to them. Being a child in the system and facing a lot of trauma in her life, art really helped her pull through and she hopes to give back through art and helping other’s.

Lea Taylor is a Perth born Aboriginal Artist who’s cultural connections are to the Wadandi Menang clan groups of the South West of Western Australia. Lea is pushing boundaries and honouring a traditional Aboriginal craft in her contemporary weaving and mixed media exploration. With a gentle but strong confidence Lea has learnt the traditional techniques of cultural weaving. From this platform she has respectfully moved into the fine art realm of exploration in both cultural story and artistic discovery.

Lea’s work comes from a firm cultural base, a strong connection to country and story through the use of bones, feathers, wood, natural dyes and fibres; defining a new whilst incorporating old story in her forms. Lea takes us on a journey reminiscent of the past with her exploration of decorative, spirituality important and practical objects. Lea’s work has been likened to Master Weaves, Yvonne Koolmatrie and Judy Watson through her skill, range of exploration and playful improvisations.

Lea has exhibited in several group exhibitions and presented her first solo exhibition in 2020 at the Kent Street Gallery. She was awarded the Perth NAIDOC Award Artist of the Year 2020 Runner-up and was the overall winner at the inaugural Art of Wellbeing Exhibition in 2018.

Peter was born in Gnowangerup in 1971; and lived a semi-traditional early life on a reserve until his family moved into a house in the late 1970’s. Peter enrolled in a Contemporary Aboriginal Arts Degree, and went on to complete a Bachelor of Visual/Fine Arts in 2001; since graduating he has been part of numerous group exhibitions that include Encounters Exhibition – BRITISH Museum 2016; CHOGM -Office of Premier Cabinet WA & Nomad 2 Worlds 2011; “About this Place” Holmes A Court Gallery, VASSE FELIX 2013; 3 Noongar Painters – Goddard de Fiddes 2009… Peter held his first solo exhibition in 2009 at Goddard de Fiddes Gallery; this exhibition was an exploration of his family totems the “Blue Wren” & “Fire”; continuing to find ways of representing the many Dreaming stories of both his mothers and fathers ancestral lands.

Peter believes that art is an incredible tool that helps him break down barriers & builds understanding and an appreciation of his language and cultural belief systems… He works extensively throughout educational systems, to help the wider communities understand the deep connectedness his people have to the environment and the flora and fauna that reside in it… He believes as his ancestors did, that all life is to be valued and sustained in way that is beneficial to the continued survival of humans on this planet…

“Art being the tool for the ongoing learning Journey”